Uganda is a beautiful landlocked country in the east African part of the continent (Africa), popularly Known as the “Pearl of Africa” because of its nature composition bordered by South Sudan to the north, Kenya in the east, Democratic republic of Congo in the west, Rwanda and Tanzania to the south. The angelic country occupies an area space of approximately 236040 square kilometers lying at an average altitude of 1100meters above sea level. Uganda is subdivided into four regions east, west, central and the North its capital being Kampala. 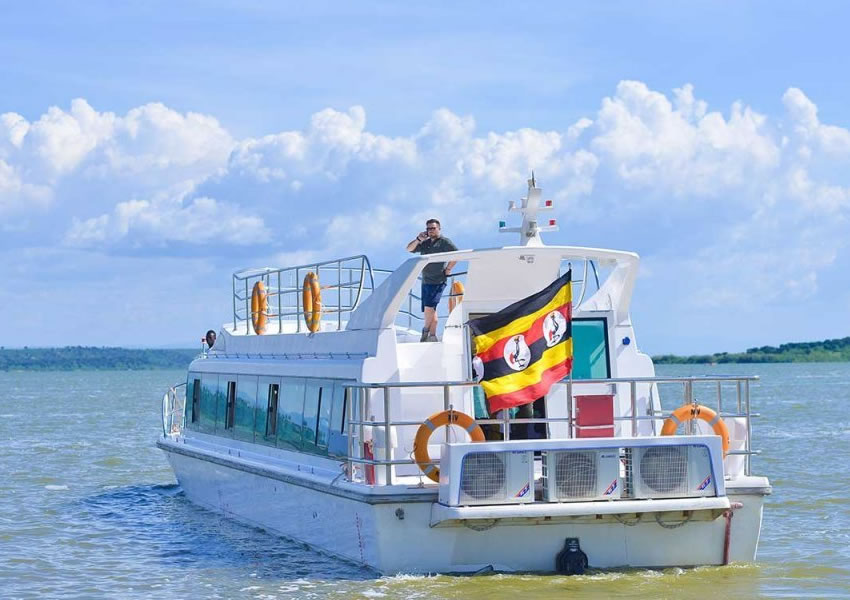 Uganda the pearl of Africa has a rich biodiverse ecosystem comprised of beautiful flora and fauna, it is known for its very hospitable people and wonderful attractions, there are a lot of unexploited resources boasting with habitats, landscapes, and the green vegetation ranging from open wooded savannah forest, acacia woodlands, grasslands, tropical rainforest, water bodies to marshy swamps. The country is a known primate destination 13 kinds of species with half of the population of the remaining mountain gorillas living in Bwindi impenetrable national park and Mgahinga besides primates, it as an incredible list of wild animals including elephants, hippos, waterbucks, bush bucks, lions, warthogs, Nile crocodiles, Jackson hartebeests to mention a few and over 1000 species of birds.

Boat cruise in Uganda is one of the top list of things worth doing while on safari to the destination, they take place along known water bodies including the Lake Victoria, Kazinga channel in queen Elizabeth national park, Murchison falls national park to the bottom of the falls, Lake Mburo national park boat cruise, there are popular sightings of large animal gatherings along boat rides and a one way to exploring and enjoying the gifting of the pearl of Africa. Uganda has an incredible number of rivers and lakes, it is home to the world’s longest river Nile upon which are several tourism activities like white water rafting, boat cruises and sundowners, it has four of the east Africa large water bodies, Lake Victoria occupying most of the south, lake Albert, Lake Kyoga and Lake Bunyonyi deepest of all and second in the whole of Africa formed as a result of volcanicity, decorative with so many small islands.

The Kazinga channel is a 40 kilometer stream water between Lake Edward and Lake George in Queen Elizabeth national park, the channel impressively runs for approximately 20 miles between the two angelic African rivers, it has the world’s largest population density of Hippos, it home to a variety of both land air and water based animals, the banks attract species that come to graze, drink fresh water,these include, African buffaloes, elephants, bush bucks, waterbucks, birds of different kinds can be sighted while enjoying the ride . boat cruise on the Kazinga channel is led by professional guides who are very knowledgeable, they will answer many questions you might want to ask, the beauty of the park. The cruise is normally done in two sessions in the morning from 8:00am and afternoon 2:00pm taking from 2-5 hours the ride offers great views of the hippos, crocodiles, the channel is a perfect spot for seeing birds a wide range of colorful birds like African spoonbill, pelicans, African skimmers, pelicans, malachite Kingfisher, Yellow billed stork, long tailed cormorants.to see many animals the afternoon boat ride is more rewarding, however if one is interested in birds then the morning cruise will be best.

Boat cruise in Murchison falls national park is done along the Victoria Nile to the bottom of the falls, the river separates the park in to the south and northern banks, Murchison falls national park gets its name from the might Murchison falls, it is the largest conservation area in Uganda covering an area space 3840 square kilometers, taking approximately five hour’s drive from Entebbe and can be accessed by road or air transport, boat cruise in the park is done in two sessions, morning form 8:00am and afternoon from 2:00pm east African time, for 2-3 hours along the Nile, there are boats arranged from the Uganda wild life authority and wild frontiers these are best fitted to transport clients on water for about 40 kilometers to the bottom of the falls, you will have beautiful views of the animals like Hippos, Nile crocodiles, waterbucks, warthogs, bush bucks, Jackson hartebeests that keep roaming around the water areas, the park has an incredible list of birds, there are super high chances of seeing the rare shoe bill stock, African fish eagle, malachite king fisher, yellow breasted tinker bird among other species.

Murchison falls national park boat safaris popularly combined with other activities like game drives along the southern bank, birding and guided nature walks in the Budongo and Kanio pabidi forests, you will have a chance to meet primates as well including baboons, chimpanzee, black and white colobus monkey and blue monkey. There is a variety of accommodation ranging from luxury to the best budget available to the stay when visiting the park, permits to do boat cruise are paid to the Uganda wildlife authority or boat owners like the wild frontiers.

Boat cruise in lake Mburo National Park, it is one of the smallest national parks in Uganda along the way to Mbarara city right after greater Masaka, trips can have stop overs at the equator where the world separates into two, normally most travellers stop at this point to take pictures and have lunch, buy souvenirs where possible, the parks history is attributed to water seeping off one of the two brothers that lived within the national park, 80% of the park area is covered with lakes and marshy swampy areas not forgetting the water pools. Including lake Mburo that the park gets its name from.

Boat cruises are organized along lake Mburo a unique feature if the lake presence within the park center, it takes place in the morning and evening hours providing beautiful views of the national park, birds of several species, and water animals like Hippos, Lake Mburo National Park boat rides take a few individuals in order to avoid water accidents and better enjoyment. The savannah conservation area covers an area space of approximately 260 square kilometers, gazette in the 1933, drives to the waterbody are rewarding s you will spot eland, Zebras, Topi among other species enroute to the park, it is well distributed with game tracks and hence other activities like game drives, horseback riding, quad biking can be done in the park not forgetting birding tours.

Boat cruise along the source of the Nile, these are done on any visit to Jinja city, it is the biggest industrial town of Uganda but with so much to see and enjoy right from the source of the Nile, it is of historical importance to the Ugandan tourism as a destination, it is where the ash of the late Mahatama Ghandi was with a big monument identifying it, most importantly, it is where the journey of one of the world’s longest river the Nile starts all the way to Egypt and into the red sea,

Boat cruises are cozy and luxurious anytime you arrive there is a canoe to drop you to and from the point where the Nile begins, however these are best enjoyed on sundowners, the motorized speed boats along the Nile are packaged to fit the pocket of any travellers including groups, enjoy organized barbeque, and lovely Music, besides boats, there are very adventurous activities that one can perform in for example bungee jumping, quad biking, horseback riding, white water rafting and tubing the Nile, these are led through by very experienced guides who will have you enjoy the trip of your life time, the trips can be amalgamated with culture like enroute is the Sezibwa falls to pass describing a fair portion of the Buganda culture.

Boat cruise in Lake Bunyonyi, it is the deepest lake in the pearl of Africa, nicknamed the island lake because of the many existing islands on the lake the around area has a few animals specifically on the animal island, it has zebras, a few antelopes, and birds, boating is done on a motorized boat ride, activities include ziplining and guided nature walks around Lake Bunyonyi or on can lazily choose to hang around the hotel for relaxation and sundowners. Boat cruise is done at any time you arrive, there is no scheduled specific time, very adventurous people can allow to swim in the lake but it is very risky this is the deepest of lakes formed as a result of volcanicity. After a long gorilla tracking safari, one can choose to reach out to Kabale for the Lake Bunyonyi experience, it is very few kilometers for the Ruhija sector of Bwindi Impenetrable National Park. Lake Bunyonyi was named Bunyonyi because of its many birds, locally ‘Bunyonyi’ is a word to mean birds, Birders would enjoy this destination so much

There is abundant accommodation around the lake area ranging from luxury to the best budget, examples included Lake Buyonyi overland resort, birds nest, hawks eye or one can choose accommodation in Kabale town.

Lake Victoria boat cruises lake place on the largest water body in Uganda cutting across through Tanzania and Kenya, this lake is locally known as Lake Nalubale with rewarding views of beautiful rolling hills and ever green plantations, there are islands on lake Victoria, the boats used can be canoes or the motorized boats, however crossing to Ssese island the easiest way is by use of ferry that crosses passengers to the hotels and tourism destinations along the Nalubale, it is surrounded by beaches one of the most popular beach activity is the boat rides for enjoyment and fun. There are several bird species that can be found here some of which are migratory and resident species. Boat cruise on the Ssese island take up to 1 hours’ drive on the new boasts that are being introduced everyday along the Lake Victoria, for those that live here canoes is the order of the day.

Boat cruise is done best during the dry seasons of the country it should be noted that Uganda receives two seasons all throughout the year between the months of June – September and December to January, it is advisable to do this during the dry season because of the increased volumes of water on the lakes. Uganda’s tourism cuts across the country with so much to explore ranging from its flora and fauna, landscapes and cultures. Uganda is generally a flat plateau comprised of numerous hills, valleys and extensive plain lands, the vegetation of Uganda ranges from the tropical rain forests, savannah wood and grasslands to marshy swampy areas. The vegetation is heaviest to the south and typically becomes scattered to the north.

While taking on boat rides it is important to take on safety measures like wearing life jackets, carry water proof covers for phones and cameras, insect repellents, hats, boots, and any other items of persona nature be more than ready to have the most amazing of your African safaris. Apart from boat safaris, other activities like Gorilla tracking, chimpanzee tracking, birding, game drives , mountain hiking, mountain cycling, horseback riding, quad biking, bungee jumping can be participated in, itineraries can be customized to fit each particle activity you wish to do on your list.