Mountain hiking in Uganda takes place in protected areas mostly with mountains, the country is known as the pearl of Africa because of its never ending beauty located in east Africa, it is bordered by Tanzania, democratic republic of Congo, Kenya and the republic of South Sudan, it is characterized by a savannah wood and grassland, montane forest, bamboo forest heath and moorland, these are natural habitats of wild animals, including Mountain Gorillas, zebras, chimpanzee, golden monkeys, antelopes like impala, oribi Uganda Kobs, Jackson hartebeests, elands have been dotted and distributed naturally in each eco system,  most of Uganda’s mountains species live in the forested areas like the mountain duikers, giant forest hogs, forest elephants among others. Mountain hiking in Uganda is at Mountain Rwenzori, mountain Elgon, mountain Sabinyo and Muhabura in Mgahinga National park. 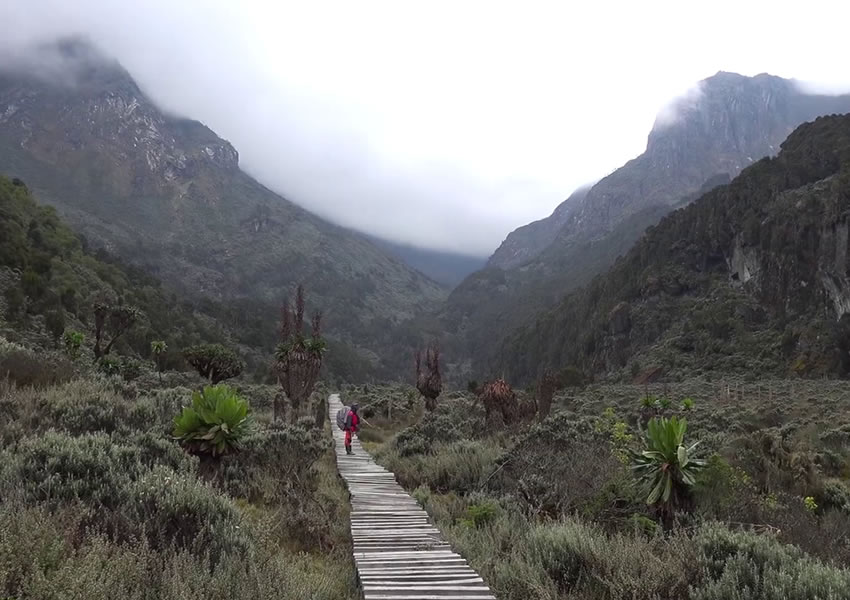 Mountain Elgon is placed inside mountain Elgon National park, Elgon is an extinct volcano, tucked between borders with Kenya and Uganda, it has the world’s widest caldera and the largest foot base compared to any other volcanoes which are occupied by bantu, and the Kalenjin’s, traditionally the mountain is referred to as mountain Masaba believed to be the origin of the Bamasaaba, the highest peak is Wagagai.-4321m above Mountain Elgon national park has a diversity of animal and bird species among which are elephants, hyenas, tinny antelopes, and over 300 bird types some of which include the Jacksons francolin, African blue fly catcher, Alphine chat, moustache green tinker bird to mention a few.

Mountain Elgon national park is stretches 1145 square kilometers it is east Africa’s oldest physicalfeature the first mountain to erupt dating back to 20 million years ago, Elgon is said to have been one higher than mountain Kilimanjarotallest of African mountains currently, however it still qualifies as the 4th highest mountain in the region. MountainElgon national park is the easiest mountain to climb in Uganda, it is for a fact less congested throughout the year and climbing does not require that much of experience but physical fitness, the well distributed trails enable travelers to meet their goal, the Sasa trail ascends from the Budadiri town, in Sironko town it is the shortest and possible way to reach the summit in four days, the Sipi falls trail starts at the Kapkwai exploration center, it is the longest but adventurous way of getting to the summit of the forest this passes through the northwestern part of the forest,  the Piswa route takes 7 days along a gentle trail, starting at the village of Kapkwata, on the north side of the mountain it is known for excellent views of wild life and the Karamojong plains.

Hiking mountain Elgon presents an opportunity to view beautiful waterfalls and caves that were created during the time of volcanicity, the caves used to be homes for the early settlers of the region, presently they lived in thatched and semi-permanent homes around the mountain base, they are the only race in Uganda that do cultural circumcision, the major cash crop grown here is Arabic coffee and barley, activities like visiting the Sipi falls, guided nature walks in mountain Elgon national park, cultural experiences can be incorporated on  a safari to eastern Uganda. The mountain is 235 kilometers form Kampala; it can be accessed from Kidepo valley national park from northern Uganda.

Mountain Rwenzori national park is a great landscape protected by the Rwenzori mountains popularly known as the mountains of the moon, the national park has a remarkable number of animal species some of which are restricted to the area, it is ranked more for its flora than the animals it passes through a series of vegetative angelic zones ranging from the farms lands of the local communities, montane forest, bamboo under shed by mimulopsis, a heather zone, characterized by the giant tree heathers, together with beautiful forms of the giant lobelia, the forest lies at an altitude of 5109m high above sea level its highest peak being Margarita.

The Rwenzori national park is adventurous compared to other mountains, it’s the only snowcapped mountain a few miles away from the equator implying that it reigns on warm temperatures, animals are present in the national park some of which are endemic to the Rwenzori, elephants, giant forest hogs, bushbucks, leopards, primates like the black and white colobus monkey, blue monkeys are also seen, the hyrax is a rare species to see, it should be noted that animals in this park are very shy and hence rare to find. It boasts with over 200 species of birds most of which are restricted to living around then Albertine rift valley for example the malachite sunbird, Rwenzori turaco are common.

Mountaineering Rwenzori can be explored on a 7day trail, the central circuit trail is normally organized through the Rwenzori mountaineering services starting the adventure at the Nyakalengija, they provide guides and porters to carry heavy equipment in case one needed help, the Rwenzori region is cold it is advisable to carry raingears, spare clothes, water prof covers for phones and cameras, sleeping bag or mat, water, hand gloves and any other material you may need for the trip.

Mountain Rwenzori has several activities that can be participated in these include bird watching, hiking, mountain climbing, guided nature walks presented on an opportunity of the presence of the mountains of the moon first discovered by a geographer Alexandrine in 150 AD who managed to name it on the world map, despite the area not being well developed with facilities, the central circuit is provided with the basic huts, camping rooms and the Rwenzori mountaineering guestrooms, the Rwenzori backpackers hostel serves the Kilembe trail. more accommodation can be accessed in the nearby fort portal and Kasese towns close top queen Elizabeth national park.

The park can be visited all year round but best in the dry seasons of December-February and June to mid-September, as the trails are less slippery which makes it easier to climb, the park receives 2500mm of rainfall annually, is approximately 375 square kilometers via fort portal by road, charter flights can be organized from Entebbe or Kajansi to the nearest airstrip in Kasese.

Mgahinga national park is found in the south western part of Uganda smallest of the gazette conservation areas of the country, it is home to the critically endangered species of mountain gorillas and the golden monkeys, part of the 8 series of the great Virunga mountains along the slopes of mountain Muhabura, Mgahinga, and Sabinyo creating a beautiful backdrop. These three volcanoes mark the southern limit of the great Albertine rift valley , the small area of the park is 33.7 square kilometers supplemented by the adjoining parks in Rwanda and the democratic republic of Congo. It is one of the coldest places of the country situated at an altitude of 2227-4127m above sea level.

Volcanic climbing in the national park takes place on the park peaks Mghainga, Muhabura and Sabinyo having a choice of hikes emulates abilities, they begin at the Ntebeko visitor center a viewing platform, the three peaks can be climbed, not much equipment is needed for the hikes but one must prepare to be physically fit the volcanic peaks are placed at Muhabura(4127m), Sabinyo(3669m), and the Mgahinga at (3474m). Muhabura means ‘the guide’ named in the 19th century when the mountain used to glow providing a natural light for travelers, Sabinyo’s rim earns it’sname an ‘old man’s teeth’ due to its weathered rugged nature of the rocks at the top hill.

Mghainga is the lowest of the peaks, the locals popularly term it as a pile of stones and are visible in Kisoro town and around the Mgahinga region, climbing through to the summit of the peak takes 6-7 hours passing through a bamboo forest, mountain Sabinyo has three peaks shared amongst three countries Uganda, Rwanda and the democratic republic of Congo, this implies that one has a chance to step in the three countries, it is possible to hike the ragged mountain only in Uganda to the summit is approximately 8 hours depending on the speed of the last hiker, mountain Muhabura is the tallest of the volcanoes caped with a small beautiful crater lake passing through different vegetative zones it enables clear views of Lake Edward and Mountain Rwenzori on a lucky day you may have chance to see the golden monkeys.

Mountain Sabinyo is one of the great series of the Virunga mountains located in the south western corner of Uganda located in Mghaninga national park the country’s smallest national park covering an area of 33.7 square kilometers, the slopes of the park are covered by bands of altitudinal vegetation ranging from the farm lands that have been covered by the local people to undisturbed montane forest followed by bamboo zone, these are homes to the famous mountain gorilla’s gorilla beringei.

Mount Sabinyo is an extinct volcano part of the three peaks of the Virunga mountains in Uganda, Mghainga, sabinyo and the Muhabura mountains in Kisoro district, the mountain is known for hiking in Uganda offering the best hiking experience, the summit of the m mountain is at 3669m above sea level, the volcano marks the intersection between the borders of Uganda, Rwanda, and the democratic republic of Congo , hiking this mountain is only possible in Uganda, it can’t be hiked in the other two because of its raged nature.

Mount sabinyo has three peaks an ascent leads first peak after which you climb the second along the narrow ridge that overlooks the beautiful breathtaking views in the deep gorges lying on each side of the mountain, third one lies on muddy steep slopes, the rim of the mountain has weathered into stubby peaks earning its name an ‘old man’s teeth’ as the locals call it because of its nature and how it looks at a distance. One can possibly hike all the three peaks of sabinyo depending on their physical fitness giving beautiful views of Virunga volcanoes.

Besides sabinyo, Mgahinga has Muhabura(4127m), and Mgahinga(3474m), these can all be climbed, the names of the three peaks comes from translation of Muhabura which means the guide, during the 19th century, the mountains crater still glowed which gave travelers a natural lighthouse. These peaks mark the southern limit of the Albertine rift valley and are share between Rwanda, Uganda and the democratic republic of Congo, the region is home to mountain gorillas that roam freely within the countries, the Ugandan side is home to the Nyakagezi gorilla family which can be visited any time of the year, it is advisable to make bookings in advance for gorilla permits worth 700 USD, the Ugandan side is smaller compared to the other Virunga parks the others standing out with a higher population of mountain gorillas.

The parks popular activity is gorilla tracking but can be combined with mountain climbing, other activities include bird watching, mountain biking, guided nature walks among other activities, the park experiences two rainy seasons, wettest moth with 250mm of rainfall and the driest month with 10mm of rain, the best time to visit is during the dry season between December –February, and June to mid- September

Uganda receives an equatorial type of climate experienced all throughout, it is divided into two by the equator, hiking in the protected areas is amazing, there are small hikes like those in Kidepo valley national park around mountain Morungule, Murchison falls hikes to the top of the falls, mountain hiking requires a physical fitness to conquer the summit, it should be noted that movement is based on the speed of the last person, wear warm long sleeved clothes, boots socks, warm jackets for some of these areas like the Rwenzori are extremely cold and need a lot of warmth, trips that last for more than a day will require to carry sleeping backs because there are no hotels enroute to the highest peaks of the mountain, hikes are led by experienced game rangers who are very knowledgeable and will make sure you enjoy the forest.